What The Mainstream Media Doesn’t Show: UC Berkeley Unity In Light of Adversity

Berkeley made national news the night of the Milo Yiannopoulos protest. Initially, the scheduled event by the Berkeley College Republicans sparked dissent among the student body when word about it spread, and people called for its cancellation. Dialogue regarding the nature of free speech and whether or not the event should take place cumulated in numerous long, long emails sent to students by the administration and heated Facebook posts and op-ed articles.

In one night, Berkeley suddenly became the symbol for “alt-left” and “radical” violence. The Internet erupted in derogatory insults directed at the UC Berkeley student body. We were called “snowflake babies” who were “wasting mommy and daddy’s money”, and even the President tweeted threats about taking away federal funds from the institution. Pictures of mobs and fires and destroyed property were shared widely and attracted thousands of comments.

What you didn’t see on the news

Destruction. It seems that that was what people wanted to see. What wasn’t shown? Students frantically messaging and calling their friends and parents to check on each other’s safety. Upperclassmen driving or walking underclassmen home, not leaving until they saw that they made it through the door safely. Students organizing cleanups, and the next day many showing up as early as 5 AM to sweep up the broken glass and remnants of the violence, so that others wouldn’t accidentally injure themselves.

My experience during the protests

That day, I had just received my acceptance email from a consulting group I wanted to join since I first saw their stand at orientation. After competing against 255 applicants and going through numerous rounds of interviews, coffee chats, and case studies, I made it into the final five. I couldn’t wait to attend the “welcome to the chapter” event, where I would finally be initiated into a group of dedicated, compassionate individuals who used their skills on projects to benefit sustainable businesses and nonprofit organizations.

I also wanted to learn all about strategy consulting and the business jargon that will soon consume my life (pixabay.com)

That night, I received numerous emails and messages from the club organizers, who were hurriedly changing locations for the welcome night, due to the eruption of violence at the protest. On every communications channel, notifications kept popping up of warnings about staying away from Sproul, where the fire was starting and police were spraying tear gas. Everyone was checking up on each other, student government officials were posting regular updates, the administration was sending emails, and my parents kept calling me to make sure I was safe. As I shouted into the phone, reassuring my family that I would be ok, firecrackers exploded in the sky and all I could do was try to run as far away as possible.

Everywhere I looked, people were running, many in couples or groups. When I looked up, all I could see was a news channel helicopter, and the chack-chack-thwip-thwip sound of its blades only exacerbated the sense of panic in the air. Sirens wailed in the background, and streets were starting to be blocked off by the police. When I finally arrived at the meeting location and ducked inside, I let out a big sigh of relief.

I felt blessed to be safe (pixabay.com)

Students coming together to help

The welcome event was a wonderful distraction away from the destruction happening outside, and for two hours I got to briefly escape to a different world. I was immediately handed a delicious cupcake, a bag of goodies called the “retreat survival kit”, too many hugs and high fives and “Congratulations!” to count, and was treated to the sound of cheers when I walked through the door. The club members welcomed me into the family, and everyone was happily talking about the retreat and kick-off to the semester.

Afterwards, as we were about to leave, though, reality came crashing back. One of the first people who walked outside immediately came back in and told us to stay. There had been a car accident right outside the apartment, and apparently swarms of people were running away in every direction. When most of the disturbance cleared, we started to file out to go back home.

As a group of upperclassmen led me towards the direction where I lived, huddling around and making sure I was safe, I caught a glimpse of the scene. There was a car parked in the middle of the road, and a crowd of people were surrounding it and pointing and chattering. A girl sat on the edge of the sidewalk, her head buried in her knees as she shook silently. Her friend talked rapidly into the phone standing next to her, and a few guys standing nearby were smoking. Scattered people with signs continued to march down the street, where cars no longer traveled.

That, in addition to what I had seen earlier, made me feel like I had stepped foot into scenes of The Purge. All I could feel then was a sense of impending doom as I watched civilized society start to crumble around. The feelings of anger, panic, terror, confusion seemed to eat up all the air in the vicinity…but before I could dwell too long on that, my new friends jolted me back to sanity. They asked me where I lived, and one of them shared a Lyft with me, insisting that we stop right in front of the gate of my dorm atop a large hill despite the fact she lived quite far away from me.

I felt as protected and loved as this little baby chimp (pixabay.com)

For the rest of the night, the sound of sirens and the helicopter disturbed everyone in Berkeley. But the next morning, students organized groups to clean up the destruction, and I saw pictures of people sweeping broken glass away from the main street. I attended class as usual, and my professors spent some time talking to us about what we experienced. We continued to learn about calculus, educational inequality, food justice, nutrition, earthquake safety, computer science, and life continued on.

In the midst of the hundreds of articles being shared on social media berating the students of UC Berkeley, we found the strength the recover and resume our studies and clean up the remnants of the violence.

I watched as the school and the community that I have come to love become the target of nasty comments and criticism. It seems so easy to immediately pass judgment when you have no idea what actually happened. As people called out students for “mob mentality” with regard to videos of a crowd cheering at the violence, I saw the mob mentality being reflected in the commenters on Facebook, where they seemed to enjoy adding oil to the flames.

For quite a while, I felt so sad and so angry. The way mainstream media handled everything didn’t accurately represent the true values of the institution and its people. The UC Berkeley community that I have come to know and cherish is filled with just absolutely amazing people, who work day in and day out in pursuit of goals that they are passionate about. The Berkeley that I see is the school composed of students who have cultivated acceptance, spearheaded movements for change, and created their own family and friend groups that they can love and care for.

Yes, UC Berkeley may have its faults. But for me, there isn’t anywhere else that I’d rather be. 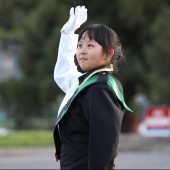